How much should you pay the guy who picks you up in the desert? 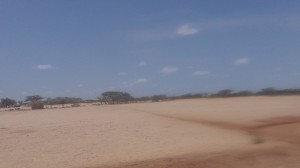 How much should you pay the guy who picks you up in the desert?

Well, my trip to Turkana started out with one of those “small world” deals. Barbie and I taught at Puget Sound Christian College for a couple of decades. Gene Morden graduated in 1993, and we had kind of lost track of him. It turned out that he is living in Turkana doing mission work and drilling water wells. I told Francis Bii, our relief director for the Horn of Africa, to try to find him and see if we could partner in some way. Francis had made three trips to see him, but he simply couldn’t find him. As I entered the airplane to go to Turkana, I heard a “Hi, Milton!” Yes, I sat beside Gene on the flight. Gene has served Turkana for 17 years giving the people water and the gospel. I asked him for advice. He said that the best thing that we can do to change Africa is to educate the children and give them water that will lead to farms. That made me feel pretty good since it was exactly what we were doing.

Our first destination in Turkana was where we had previously drilled a well. If you are a follower of my blog—read the one about “Children Under a Tree.” When I last left this spot, we had drilled a well and saw a couple of hundred children under a tree. Now there is a school there for those children who had been dumped. But I’m glad we showed up because they had run out of food. How would you like to be Rebecca, our teacher there, who is teaching 130 children in one room (obviously it didn’t get built big enough) who haven’t been eating? Can you imagine? But some students at West Texas A & M had given about 200 goats to the region, so the children are living off the goat’s milk. We hope to get them food soon. We were also given land by the chief, and it is fenced off now with a farm started. No food yet, but as we irrigate it—crops will come. A church meets there now in the school building. But the most amazing thing is that there is a town here now. When I left it in February, I couldn’t see a single house. Now there are little huts all over the place. We still need food coming there more regularly until the farm produces. But what a great change has taken place there.

When we left the place, our truck broke down. We were in a remote place in the desert, and we were stuck. A motorcycle came by, and Markson hopped on it and rode all the way into Lodwar. He came back much later with oil. That didn’t fix things, and the motorcycle had left. We decided to hike to a location that someone might recognize. Francis and Markson called people from the desert trying to find someone who had a vehicle who could come and get us. Why can’t Americans get cell phones that work like they do in Africa? We were calling from one of the most remote places on earth and getting coverage. I can’t even get consistent coverage driving down I40 in Amarillo. As we were walking, I was thinking thoughts about why I didn’t bring hardly any water. I pondered why in the world I was taking doxycycline that causes you to sunburn. I was wondering why there were camels out here. And I was amazed at how I perfectly remembered the theme song to “Lawrence of Arabia.” A Turkana elder stopped and asked us if we wanted some tea. I guess he was like the Good Samaritan. But what I wanted was some cold water.

Amazingly someone found us and picked us up. How much do you pay someone who picks you up in the desert? You know the answer to that one, don’t you?