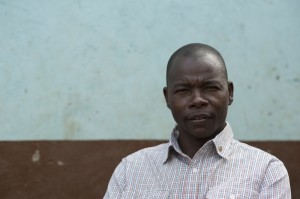 If there was ever a person I was destined to meet, it was Jared Odhiambo. Some years ago, I gave my life to helping AIDS orphans in Africa. When I made this commitment, I didn’t know how to do it. In fact, I didn’t even know any AIDS orphans. As a result I started sending emails and searching the internet to find someone who could help me. A person at our church in Seattle told me about a missionary in Kenya whom she had been helping. She said that she thought he had a Kenyan in his ministry who might be able to help. She didn’t know his name. Then I asked another friend if he knew somebody who could help. He told me that he had met a young African who was visiting Abilene Christian University. This young man was Kenyan and wanted to help AIDS orphans in a slum in Kisumu. Somehow I didn’t get all the information about him, but he sounded like the kind of person I wanted to meet. Then another friend told me that he had heard of a young man named Jared Odhiambo who had a vision of doing something big to help orphans. I got the information and emailed him. It turned out that all three of the people that I was searching for were really only one. Every person that I asked was leading me to the same person—Jared Odhiambo.

Rick Atchley was supposed to go to Kenya to preach to a group of missionaries about the time of my search. A conflict happened, and Rick asked me if I could take his place. I did, but as soon as I finished preaching, I asked if someone could get me to Kisumu. I wanted to find and meet Jared. Dan Bell took me to show me what was happening in the Nyalenda slum in Kisumu. And I met Jared Odhiambo face to face. It seemed within seconds that we knew that we were supposed to be in each other’s lives.

The story was that Jared was walking through the slum with his two friends, Thomas and James, when they encountered a little boy who was being beat up by some other older children. Jared stopped the fight and asked why they were hurting this young child. The bullies told Jared that the child had stolen some money from them. It turned out to be true, but it was only a tiny bit of money. Jared paid the money back that had been stolen. When he asked the boy why he had stolen the money, he said that he didn’t have any food. He was hungry. Jared had his heart broken. He took the boy back to church and had a picnic. He started sharing his food not only with this child but others. And a dream was born. He wanted to help feed, educate, house and tell the thousands of AIDS orphans in the slum about Jesus. He just needed a partner with some resources and a few open doors.

When I heard Jared’s story, I knew Jared’s dream was my dream. At first others didn’t want us to go for it. Doors were closed. Whether it was with the government or at church—we were discouraged from sponsoring and educating all of these children. And at the same time as others were trying to limit what we could do, children were being dumped on Jared’s doorstep. Jared already had some things going with a small school in the slum, but this was not enough for his dream. Thousands needed to be influenced through this ministry.

God led me to the right man. Jared is a man of vision. Jared is a man of integrity. Jared is a man like Christ. Today if you go to the place of his vision, there is a large school called the Ring Road Orphan’s Day School. Thousands have been educated there. They are producing some of the best students in Kenya. The government tried to shut it down. They don’t now. It is just too good of a school. His friend, Thomas, had another incredible dream of providing resources to help with the disease for the hundreds of thousands of neglected people in the disease filled slum. He partnered with Jared and me too. And now there is medical help on the same campus as the school not only for AIDS but all kinds of diseases. And of course, there is a vibrant church in the middle of it all.

Certainly, I honor Jared. He is my partner. He is my friend. He is my hero. Today is my birthday. I can’t think of a better present than the business leaders here in Kisumu, who at one time couldn’t comprehend his dream, honoring him and recognizing his accomplishments. In fact, they will install him as the president of the Rotary Club here today. The theme of Rotary Club is “Service Above Self.” Could anyone represent this goal better than Jared? Be honored Jared. No one deserves it more.

Moses—What a Difference a Sponsor Makes