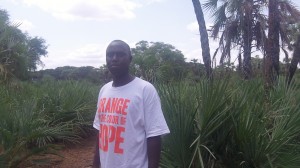 As I was sleeping in Turkana, I heard a huge noise. Being 2:30 in the morning, it startled me out of bed. I ran outside to see what had made the disturbing noise. It sounded like a truck had run into the building. Others were outside trying to figure it out too. When we looked up into the sky, it was obvious. We had heard thunder. And soon we saw lightning. And then the most unusual thing happened. We felt rain. It is unusual because it has been years since some of the people of Turkana have had any rain. And now I was witnessing rain.

Francis Bii had been told by a man from Turkana to bring some rainwater from Eldoret to prove to him that water still falls from the sky. Now it was actually happening. Francis declared, “Your prayers have been answered!”

As we traveled in the morning to open a new well in the desert, we noticed all the puddles from the rain. But we had not traveled too far until they were all gone. Most of Turkana had not received rain. Where we were going, it has not rained in five years. I thought I had been to the worst part of Turkana. I had not. Previously, I had been shocked to see that the dirt looked like sand in the area where we had drilled. I felt like we were on a beach. But where we went today, the ground was a wasteland. It was like fine gravel. You would need a pickaxe to crack the land. And in this scorching desert, we opened a borehole today. Water flowed on my very first pump of the well. Typically, the Turkana people danced and sang. I read Psalm 107 to them and told them that they have a God who brings water into the desert. They clapped and sang again.

To show their appreciation, they gave me a goat. They had asked me if I had eaten. I told them no. And the next thing you know, I am holding a goat. As nice as this present was—the other was much better. They also gave us land. At first, I wasn’t that excited. The land around us looked like concrete. What could we do with that kind of land? It would be too difficult to farm.

But the land wasn’t near this place. We drove miles to get there. Our truck couldn’t reach the land because our land was in a valley. As I walked to the edge of the overlook and looked down on our land, I couldn’t believe it. It was lush. It was an oasis. I felt like I was walking into the Garden of Eden. Obviously, there was water under the ground. None of the plants were food, but if they were cleared away—this was the best place imaginable for farming. Our water well driller told us we could drill a shallow well here, irrigate the land, and begin a farm that could feed the largest town in Turkana. I just couldn’t get over how fertile the land was.

It hadn’t rained here yet. But there was water that they couldn’t see. They hadn’t heard the thunder here. But the news of the thunder had already reached them. They had to conclude that God was still around. In fact, He was a lot closer than they thought.

An Unbelievable Story of Forgiveness