Will You Tell the Bad News 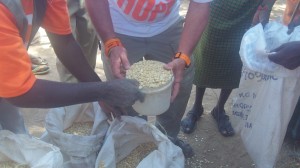 This is a guest post from CRF President Milton Jones’ blog, Through Orange Colored Glasses.

People are always on my case because I know so many bad things. Maybe it is because the first thing I do when I wake up every morning is to read “The Poverty News.” I keep being asked to change the subject. “We are tired of hearing of famines and drought,” they say. But sometimes you have to tell the bad news. I have found that there are so many messengers who only want to talk about the pleasant events. But would you tell people bad news if people really needed to hear it? Or do you avoid the negative simply to circumvent conflicts or pain?

How would you like to always be the one to break the bad news to people? Agabus was that way. Maybe you don’t remember him. It’s probably because we try to forget bearers of bad news. But every time we see in him in the book of Acts, he has bad news.

The first time Agabus tells the bad news is in Acts 11.

27 During this time some prophets came down from Jerusalem to Antioch. 28 One of them, named Agabus, stood up and through the Spirit predicted that a severe famine would spread over the entire Roman world. (This happened during the reign of Claudius.) 29 The disciples, each according to his ability, decided to provide help for the brothers living in Judea. 30 This they did, sending their gift to the elders by Barnabas and Saul. (Acts 11:27-30, NIV).

Some people get to announce the good news of the coming Messiah. Agabus gets to announce a drought. But it is still God’s message. And it is the message of the moment. And God’s message needs to be told whether it is the one you want to tell or not.

The second time we see Agabus is in Acts 21.

10 After we had been there a number of days, a prophet named Agabus came down from Judea. 11 Coming over to us, he took Paul’s belt, tied his own hands and feet with it and said, “The Holy Spirit says, `In this way the Jews of Jerusalem will bind the owner of this belt and will hand him over to the Gentiles.’ 12 When we heard this, we and the people there pleaded with Paul not to go up to Jerusalem. 13 Then Paul answered, “Why are you weeping and breaking my heart? I am ready not only to be bound, but also to die in Jerusalem for the name of the Lord Jesus.” 14 When he would not be dissuaded, we gave up and said, “The Lord’s will be done.” (Acts 21:10-14, NIV).

God’s Word always leads to good news, but there is often some bad news to be told before the good news occurs. In the case of the famine, God was going to use it to bring healing of bad relationships between Jews and Gentiles. The famine was going to create an opportunity for the Gentiles to give to the poor brethren in Jerusalem. Paul’s arrest was going to eventually take him to Rome where the gospel was going to penetrate the powers of the world with the power of the gospel.

There is nearly always bad news before good news. In fact the bad news makes the good news seem so much better. But will you tell it?

Before there is redemption, the bad news must be told. If you don’t know you are a sinner, you will never understand why you need to be saved.

Before there is restoration, the bad news must be confessed. Unless you confess how you have wronged someone, they will never be able to forgive you.

Before there is revival, the bad news must be declared. Unless corporate sin and misplaced priorities are confessed, the stirring fire of revival never ignites.

Now I know a few people who make it their goal to tell bad news. They are the Eeyores of the church. I don’t think that is your calling. But along the way in putting in a good word for Jesus, you may have to tell the bad news too. When it is your turn to be an Agabus, don’t retreat. Put in the bad word knowing the good is not far behind. God caused some powerfully good things to happen after Agabus told of the famine. He can still do that with famines today.

Long-Term Change from a Short-Term Mission